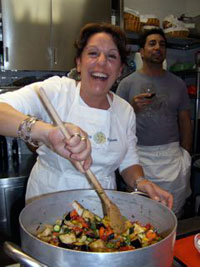 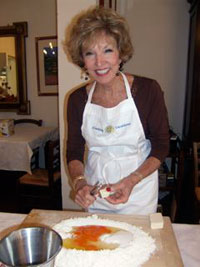 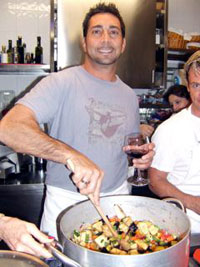 What you’ll learn:
Lauren Scuncio Birmingham offers weeklong cooking vacations in Italian villas in locations around Italy, including Tuscany, Sicily, Rome, Umbria, and Campania, where generations of her family lived. You’ll not only measure, knead, cook, and eat, but also visit pastry makers, fish markets, wine bodegas, butchers, and cheese makers. Choose from dozen of courses, such as a citruscentric week along the Amalfi Coast, where seafood stew with lemon is just one of the dishes you’ll prepare; a visit to Bologna that includes a stop at an organic Parmigiano- Reggiano cheese producer and a balsamic vinegar tasting lesson; or a women-only week at Lake Como in Northern Italy. Historical notes are given for each recipe, many handed down from Birmingham’s great-grandmother, Lucia, -such as asparagus with cherry tomatoes or tagliolini al limone, a pasta dish of lemon and cream. In addition to these offerings, James Beard Award-winning Chef Todd English serves as a guest instructor, leading several excursions each year.

Settings:
Depending on the location, you might pick lemons for granita, or hunt exotic white truffles. “You’ll live and cook with locals, use fresh ingredients, and learn to incorporate the region’s flavor into every recipe,” Birmingham’s says.