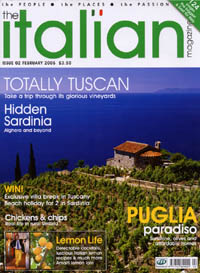 So much more than just a garnish for your evening tipple, the lemon is hugely popular across Italy with cooks and consumers alike. Rebecca Gooch visits the citrocentric Amalfi Coast to learn more about this distinctive yellow fruit.

To think, I used to assume that lemons were just the colourful half of the ‘ice ‘n’ slice’ that made for a perfect gin and tonic. Don’t let the citriculturalists on the Amalfi coast know this, or they’d throw their hands in the air at the hopelessness of such una scema. But for years I’ve been casually tossing the odd canary yellow waxy specimen, imported from who-knows-where, into my supermarket trolley, then letting it sit forlorn and forgotten in the fridge, wizening and wrinkling as it waited to be summoned into service with the Gordon’s and Schweppes.

But after a week perched above Positano in the bosom of Campania lemon country, this ignorant scema is now una saccente, a smart-ass worthy of the famous black leather Mastermind chair, with the Limone of Costa d’Amalfi as my specialist subject. And the Amalfi lemon, or Sfusato Amalfitan (officially recognized as unique by the PGI, or Protected Geographic Indication, in 2001) is, indeed, special.

Identified by its more prominent ‘nipple’ end, paler yellow colour, impressively high number of oil glands, virtual lack of seeds and weighing at least 100grams, it is the first choice for an authentic limoncello (lemon liqueur). It also cures hiccups, gout, dandruff and halitosis. It gets rid of cabbage smells in the kitchen, and makes your shoes shiny if you wipe it over before the polish. It is a symbol of fidelity in love. It stops the shells from cracking when you’re boiling eggs.

Then there’s the landscape that came about partly because of the lemon’s scurvy-beating Vitamin C content. When the royal Navy made lemon just consumption mandatory for its sailors in 1795, Amalfi lemon cultivation hit the big time. As a result, we have the exquisite, dramatic scenery of ‘The Divine Coast,’ recognized as a World Heritage Site by UNESCO in 1997. Yet before 17th-century farmers hacked out the hillside piazzatta, or lemon terraces, which cling like verdant steps along the once harsh, impenetrable strips of cliffs from Sorrento to Salerno, there was nothing but the crash of waves on rocky scrub.

By the end of the 1800s this stretch of sea-facing land south of Naples had definitively become the world-renowned coast of lemons, and almost by accident, a photographer’s dream and fashionable tourism magnet, attraction visitors and residents as diverse as Greta Garbo, John Steinbeck, Gore Vidal, Bob Geldof, Sophia Loren and Sting, it also saw the birth of luxury hotels like the sumptuous Le Sirenuse at Positano, where Danny de Vito, the Rolling Stones, U2 and Ingrid Bergman have lain their heads.

However, the Amalfi lemon is not just a fruit of fond nostalgic memory. It’s still at the heart of everything Amalfian, from decorating the cheerful marker signs along cliff-clinging Stat Road 163, to influencing cookery and inspiring the ceramics industry of picturesque Vietri sul Mare.

I was only ten minutes out of Naples airport, heading to Positano for a few days of lemon cookery lessons and exploration,…in Positano,… when I got my first lemon lesson.

Mario, my driver, explained that whenever her was “ndurzato”, “Like my stomach is stuffed like a ship that can take no more cargo,” the best way to quickly cure his malada pancea, or tummy ache, was to boil three to four pieces of lemon rind until the water goes yellow, then add sugar and drink as hot as he could bear it.

“We call it canarino. Like the yellow bird. Three minutes and your indigestione will be gone,” he assured me. “I once ate three types of cheese in one meal ç bah! I was abuffato, stuffed! My Stomach felt like a stone. The only thing that fixed it was canarino.”

As a cure-all and basis for Amalfi cuisine, the lemon should be treated with gentleness and respect, I soon learned. The women who picked them at the turn of the century, lugging huge baskets of sfusato on their shoulders up and down the precipitous steps between the terraces had to clip their nails and wear cotton gloves to avoid damaging the precious merchandise.

“You should squeeze it like you are squeezing a nice girl,” I was quickly instructed by Mamma Agata during a lemon cookery class in her kitchen at Ravello, when I ham-fistedly clutched half a limone and tried to squish the beejayzus out of it.

The embodiment of a twinkly-eyed, ample Italian mamma, Signora Agata is something of a culinary legend on the Amalfi coast, having cooked for celebrity visitors like Humphrey Bogart (a “sweet, quiet person” who like fried anchovies ç and lots of whisky), Jackie Kennedy (very elegant, liked mozzarella and tomato salad) and Fred Astaire.

As she rattled through recipe after recipe, chopping, stirring and whisking, she explained that lemon juice should nearly always be added at the last minute. Too much cooking and it becomes bitter. But when fresh, the Amalfi lemon is one of the sweetest, tastiest lemons in the world, due to the mineral rich volcanic soil it grows in, courtesy of nearby Vesuvius. And it’s not just fondly biased locals who believe it. Studies at Universities of Slerno and Reggio Calabria have shown that it contains twice the amount of flavor-giving oxygenated compounds than other lemons. The researchers concluded that, “it is possible to affirm that the extract from Amalfi Coast lemons has a remarkably superior flavoring power.”